The mighty ship is in dry dock. But the water is close by – the upper deck presents a magnificent view of the undulating waves below. The black-beige stripes along the wooden hull extend from impressive stern to elegant bow. HMS Victory is anchored in a dry dock in the port of Portsmouth on the English Channel. And at a swimming pool with artificial waves in Erding near Munich.

Horatio Nelson, 1st Viscount Nelson, 1st Baron Nelson, Order of Bath, Duke of Bronte – to give him his full name with all honours and titles – was highly successful in several major naval battles and killed in his last and most important at Trafalgar off Spain. Admiral Nelson is a true national hero in Britain. His ship, HMS Victory, which he led into his final battle in 1805, has survived to this day: it has found a berth in Europe’s most important military port and serves as the flagship for the First Sea Lord, the Royal Navy’s highest ranking officer. The Victory is open to the public and can be visited throughout and is so always worth a trip. Just like the other HMS Victory in Erding in Bavaria; but you can even stay overnight on that one.

HMS Victory and the Battle of Trafalgar

The Victory Hotel is, of course, not an exact replica of Nelson’s flagship. But what Josef Wund, who is both the investor and architect, has made of the design he has chosen is no less spectacular for that. But we should first take a closer look at the Therme – the spa – itself if we wish to understand what the Victory Hotel means for the Therme Erding. First of all, it’s one of those projects that can only be described with the help of superlatives.

Crews drilling for oil in Erding in 1983 discovered a thermal spring with sulphurous water instead. Sulphurous water is one of mankind’s oldest remedies and is usually used to treat musculoskeletal ailments. The spring waters in Erding arrive at the surface from depths of up to 2,350 metres at temperatures that still range at around 42°C. Following its discovery, the spring was put to small-scale use and it was not until 1999 that the ‘Therme Erding’ was opened. Even then, the investor – Josef Wund, an entrepreneur from Friedrichshafen – was already setting the course towards expansion. The spa therefore grew from year to year – as did its popularity with visitors. Additional baths were added, new sauna landscapes opened along with slides, pools, bars and restaurants.

“Josef Wund is known as ‘The King of the Baths.’ Four leisure pools have been built under his supervision. He was also responsible for planning, financing and building the German pavilion for the Expo 2000. So he’s come really far since his days of working as a skilled bricklayer.”

At present, 29 pools, 26 slides, 30 saunas, 450 large genuine palm trees and more than 4,000 loungers populate an incredible 185,000 square metres. The Therme Erding is divided into different sections. The ‘Vital-Oase’ and the luxurious ‘Royal Day Spa’ wellness area are only open to people over the age of 16 and admission costs extra (or may be booked separately). The latest ‘addition’: the 9,000-square-metre swimming pool with artificial waves and outdoor area. Right next to which HMS Victory has been anchored.

It’s obvious that a hotel is just what the Therme Erding needed. The spa world here has now grown so large that a single day’s stay is not enough to do sufficient justice to all the attractions. It’s easy for those with a soft spot for pools, sauna and wellness to spend a week at the Therme. Particularly as the surrounding area also has so much to offer. A trip to the brewery in Erding is obviously something worth doing and the transport links to Munich are great. So building a hotel was almost overdue.Josef Wund put a lot of effort into the project and came up with an absolutely harmonious concept for his Victory Hotel.

Design between post-modernism and authenticity

To get to the hotel after arriving in Erding, you first have to drive right past the gigantic spa complex: past the hotel’s own multi-storey car park, past the main entrance, past the spa’s huge 215-tonne glass dome – because the Victory Hotel was built far away from the crowds of people who visit the spa every day. Sometimes more than 10,000 visitors flock to the spa in Erding in a single day. Guests at the Victory, however, are able to comfortably access the bathing areas from the hotel.

Underwater feeling: the corridors at the Victory Hotel

The lounge is decorated with paintings of the Battle of Trafalgar that depict the most glorious use of the ship whose hull has been duplicated here and whose stern protrudes into the lounge. So seafaring romance only on the Victory? Not at all. The route to the rooms turns into a post-modern corridor experience built of steel and colourfully illuminated glass. The rooms to the left of the hallway, overlooking Erdingen’s green meadows, also possess a futuristic design: the polished teak walls have assumed the shape of a ship’s hull; white, reflective floors and ceilings make the rooms look larger and the white furniture creates a contrast to the dark wood. Yes, it feels like being inside a luxury yacht.

The impression that the rooms on the right side, facing the pool with artificial waves, present is quite different. Light wood and an interior design that takes up the style of spacious cabins on an old tall ship dominate here. Great for families: up to six people can be accommodated in the Captain's Cabin, including two children in bunk beds that have been designed in the shape of dinghies. The panoramic outside cabin on the top floor is a bit plainer in style and possesses more modern furnishings and features a balcony from which the occupants may watch the goings-on in the pool.

The rooms are absolutely quiet in spite of the lively bathing activities outside. The windows are soundproof and no noise gets in. Sound insulation was always a central consideration in the realisation of the construction project. So it’s not surprising that the planners chose Kampmann’s Venkon EC to handle the hotel rooms’ air-conditioning. The blower convector, appropriately also called Hotel Venkon, is the quietest on the market – which was certainly a decisive argument but by no means the only one. Besides with its whisper-quiet operation, the Venkon EC also scores with a fan that’s driven by an EC motor. It’s able to achieve up to 70% of energy savings, is infinitely variable and highly efficient, particularly in the low speed ranges that are common for convectors. But it’s not only noise emissions that characterise air conditioners – the air quality is just as important, particularly in hotels. That’s why the Venkon EC has been certified in accordance with the strict VDI 6022 hygiene guideline and is thus able to guarantee indoor air of the highest of qualities. It goes without saying that it’s also possible to incorporate the convector into the control systems for the building – either using Kampmann’s KaControl or Modbus or BACnet connections. The Victory Hotel uses its own control technology; visitors are able to conveniently set the temperature by way of a touch panel.

It must also be mentioned here that the Victory Hotel has a second wing next to it that has pursued a different theme. Venetian romanticism awaits behind a renaissance façade that offers a view of the surf from the pool’s artificial waves. The stylish rooms feel like a palazzo overlooking the lagoon. And that’s exactly what those who designed the whole complex have succeeded in achieving: the creation of a holiday setting that takes guests away from Germany to far-flung countries. A subtropical fairytale of crystal clear warm water, relaxation under palm trees, cool drinks at the pool bar and heavenly nights in air-conditioned rooms. If Lord Nelson wasn’t standing on his column in Trafalgar Square, he’d have found his paradise here.
Europe’s largest spa world is open all year round.

More information is available at www.therme-erding.de/en/. 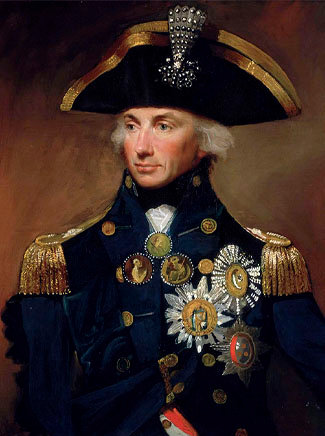 Plagued by seasickness, one-eyed and one-armed – that’s how Admiral Horatio Nelson entered into battle at Trafalgar. Perhaps that illustrates how passionate Lord Nelson was about going to sea. Perhaps this passion is also revealed in the fact that he joined the Royal Navy in 1771 at only 12 years of age, as well as in the fact that he quickly rose through the ranks in spite the seasickness that plagued him his entire life. And in spite of the malaria that he contracted off India at the age of 17. Nelson had risen to the rank of commander and retired at the grand old age of 28 to live with his wife Fanny in a parsonage. The French Revolution just five years later drew Nelson out of retirement. He fought in several battles and was injured in the eye in 1794, which he subsequently lost. He was hit in the arm by a bullet while attempting to capture the port of Santa Cruz in 1797; the ship’s doctor had to amputate it. But it wasn’t the injuries that made Lord Nelson famous during his lifetime, it was his strategic skill and ability to inspire his crew to perform at their best. So he was also an early motivational trainer. He put this talent to further good use at the Battle of Trafalgar in 1805, in which the United Kingdom crushed the numerically superior armada of French and Spanish ships. Nelson was wounded in the shoulder during the battle and later died on board HMS Victory. But Great Britain had conquered the waves.