Valid as of March 2015: EN 16430 governs the measurement of performance on fan-supported trench heating systems and thus establishes at long last a comparability of these units. Even the cooling capacity can be measured.

In modern architecture, fully paned facades are an often used stylistic device. Especially with high rises, prestigious buildings and conservatories, glass as an expression of openness and transparency is a frequently seen element. So as to not block the unobstructed view with classical radiators or mounted units, for the most part, trench heating units are placed behind the glass façade. In their usual use, heated air rises up the glass front from the convector heater – be it by way of natural convection, be it supported by a fan – and lets colder room air flow downwards. This causes circulation and the whole room is heated.

And that is the functional principle of a trench heating system – known by everybody and explained umpteen thousand times. All the more surprising if the fact that there was no European standard for measuring the performance; least of all when the unit could also cool air down. Planners, builder-owners and architects could never really be sure of the actual performance of the convector heaters. Until now – for EN 16430 for “fan-supported heating systems, convector heaters and trench heating systems” has applied since March 2015.

Comparing similar products of different manufacturers is normal practice in the market economy. In order to make an authoritative comparison, reliable data is needed – yet for trench heating systems this was not been previously possible for lack of a clear-cut standard. Some manufacturers measured in line with EN 442, which is not the worst choice. It does provide for the measurement of performance of heaters and convectors. The standard is, however, not intended for trench heating systems, nor does it give any information about cooling operations. In addition EN 4704-4 was also often drawn upon. This standards does indeed apply for trench heating systems, but, on the other hand, excludes the cooling capacity and is no longer up-to-date when it comes to the test set-up.

Some managed with EN 14518 – a standard for measuring the capacity of chilled beams that are naturally fitted to the ceiling, in order to now be able to measure the cooling capacity at long last. Others, on the other hand, measured the air intake temperature to calculate the cooling capacity from that. This also is an unsuitable, falsifying method because the reference air temperature and the air intake temperature relevant for the design usually differ greatly. The least reliable is fully calculated performance data without measurement. And yet: entire manufacturer catalogues are filled with such abstract data.

It is now EN 16430 that puts the process imbroglio into order and is meant to provide planners and architects with the necessary certainty for the design of the heating and/or cooling requirements. With the publication of the standard, a longer-lasting process comes to an end. Almost seven years passed from the work assignment of the European Committee for Standardisation (CEN) in 2008 over the first draft, the national and European appeal meetings down to the approval by all CEN countries.

The new standard is in three parts:

With that, EN 16430 is not new in principle – EN 442 was taken as a basis, it was changed and supplemented, however, in decisive points:

The layout in the test chamber now equates to real conditions. The back wall (which reproduces the window front) is brought to the temperature of 16 °C +/- 0.5 K when heat is needed, which equates to the normal surface temperatures of modern windows. Further, the test channel is pace at a 50mm distance to the back wall like in practice instead previously at 200mm distance. The reference air temperature is measured at 2 metres’ distance from the façade and at a height of 0.75 metres. When cooling is needed, the surface temperatures of the test chamber, especially the back wall, are to be set at 28°C +/- 0.5 K. 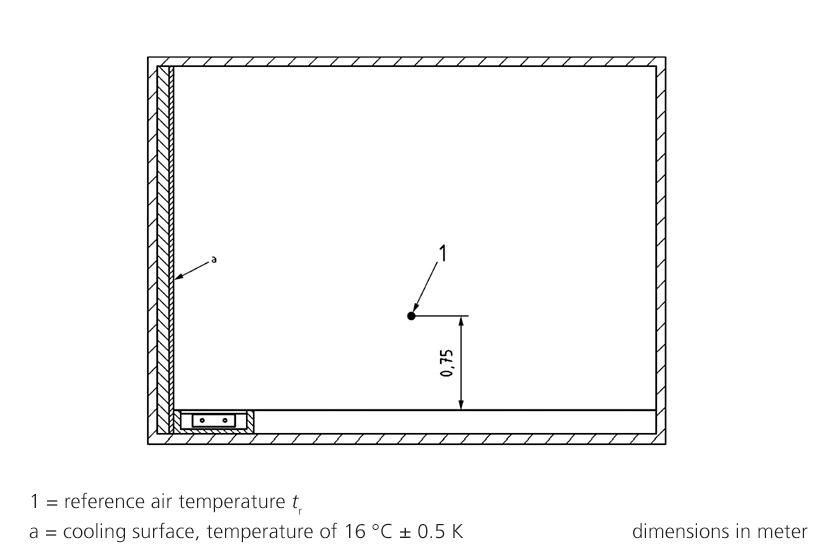 EN 16430 is long overdue for trench heating systems, because effective cooling from out of the floor is a real art. Warm air rises up and cool air goes down – every child knows that. For a trench heating system, this means that in cooling mode, it has to work against physics. It suctions air close to the floor, cools it and blows it out onto the façade. If this air falls too quickly, a “short circuit” develops. The conditioned air is suctioned in again and the unwanted circulation thus causes the cool air to collect over the channel, which then is distributed from there with a low temperature at a low height in the room. The desired cooling capacity is not achieved, draughts may appear and, in plain words, cold feet. This short circuit can be reduced considerably by a special geometry of the convector. Such an optimised flow allows the air to flow high up the window front where it mixes and penetrates into the room with a pleasant temperature. The test set-up of EN 16430 shows whether a convector is in the position to cool efficiently.

The criterion for the cooling capacity is the reference air temperature, which is measured in the middle of the test chamber at a 2m distance from the façade and at a height of 0.75m. Depending on the short circuit percentage, this can deviate significantly from the air intake temperature. After all, the temperature in the room the user is spending time is decisive. If room temperature (reference air temperature) and air intake temperature are wrongly equated, the result is very different cooling capacity differences. In practice, performance differences of more than 50 percent have been measured caused by this.

With trench heating systems, not only the heat and cooling output but also the sound power is included in the evaluation as a decisive factor. The convectors should always be dimensioned on the basis of the sound pressure level. This is the only way to guarantee that the necessary heating and cooling output is supplied under due observation of the sound thresholds. In most cases, the units are stated in data sheets with average sound pressure levels of 30 to 35 dB(A). In real life, however, many convectors reach in part more than 50 dB(A), to achieve their thermal output – far too much for acoustically sensitive rooms. The reason for the difference between the test result and actual output can be the application of an unsuitable standard, or a wrong reference air temperature when calculating the output. For the planner, this can mean a complaint, which, in a worst case scenario, ends up with the already installed convectors, initially appearing to be cost-efficient, having to be ripped out and having to be replaced by reliably measured ones. EN 16430 stipulates for the sound emission that the convectors are measured at the highest. Middle and lowest rotational speeds. In addition to the sound output, the manufacturer can state the sound pressure level with a fixed room absorption of 8 dB(A). 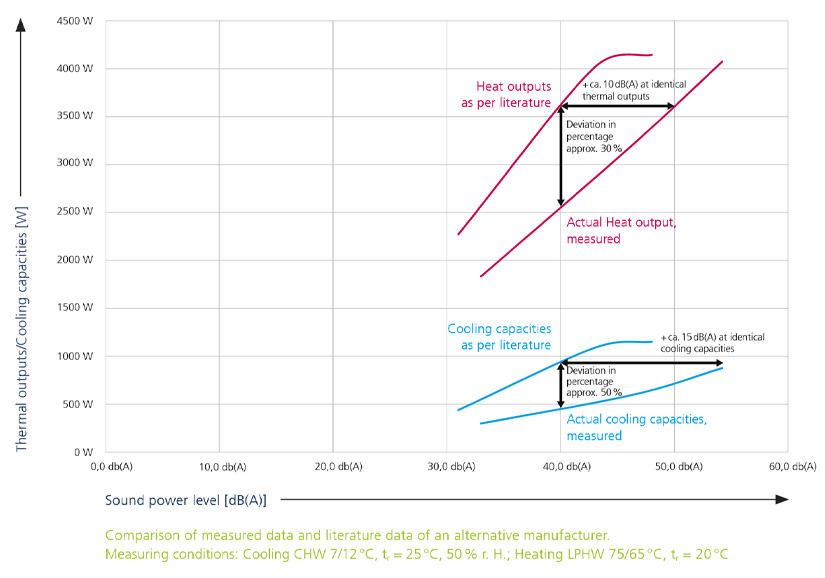 EN 16430 is thus the only standard as per which trench heating systems can be measured reliably and practice-oriented. It caters for planning reliability and a cross-manufacturer comparison – of course, only if all manufacturers measure and state their data as per EN 16430 from now on.